Most players who have played the game were probably surprised to find that there is turn-based combat in Pryzm. This game was designed for ease of entry so beginners and even non-gamers can get into it fairly quickly. But underneath that simplicity lies a more complex system for those who choose to exploit it. 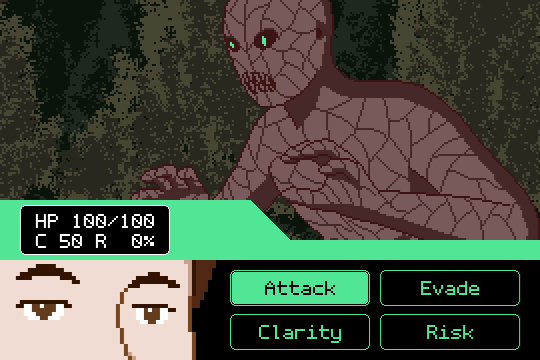 The screenshot above shows the standard combat scene. Turn-based combat is just that, players and enemies take turns to execute moves. The numbers above the player's avatar represent the status of the player. At this moment, it is the player's turn and there are 4 options available.

This is the Clarity sub-menu. These are moves that boost the player in some way. Using them cost clarity, represented by C in the player stats.

This is the Risk sub-menu and where the combat can get complex. Pryzm uses a risk system that slightly changes how turn-based combat functions traditionally.

Attempting any Risk move will check the probability of success represented by R in the player stats. This percentage changes and is determined by the different normal moves performed. In general:

The higher the R%, the greater the chance a risk move will be successful. So what is stopping a player from just maximizing the R% by spamming evade? Well, there's a catch. If your R% is more than 100%, it resets to 0. This means that it is almost impossible to get a 100% success rate, which is why these are risky moves! A failed risk move will result in the enemy performing a critical attack or clarity drain on the player. The system, therefore, gives you control of these moves depending on how risk averse you are and how you strategically manipulate the R%.

It is entirely possible to not use any risk move, but you will find it harder and harder to avoid it as your clarity goes down throughout the story. Remember, this game does contain elements borrowed from the horror genre so you are not expected to defeat every enemy. Escaping is a very viable option to conserve clarity. But then you would possibly miss out on some key items dropped by enemies... It's decisions like these that define your game experience.

Hopefully, this tutorial has shown you what you could do with the combat. Now get back into the Pryzm and make it out with the best outcome!

Survive and escape the mountain.